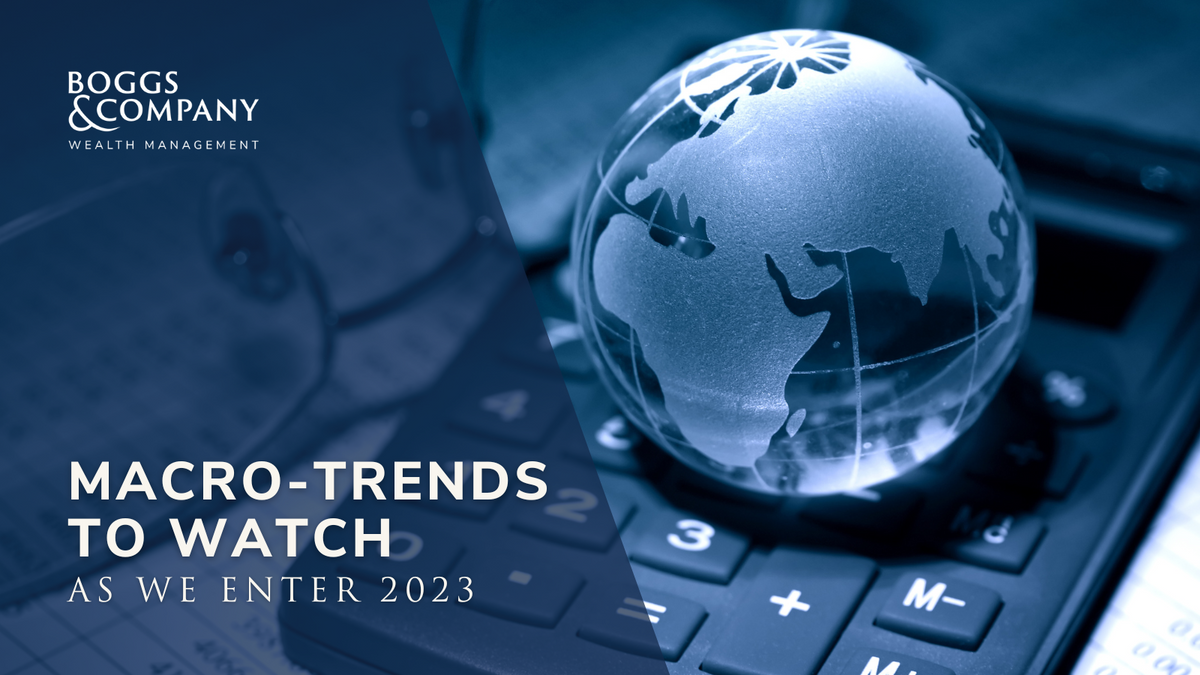 Macro-Trends to Watch As We Enter 2023

Now that we've entered 2023, there are a lot of economic metrics worth paying attention to, especially as each will have an impact one way or another on our investments. But whether or not markets will reverse course and post positive yearly numbers next year might come down to three important macro-trends: employment, housing, and manufacturing.

The government-released gross domestic product numbers for the third quarter of 2022 was 2.9%, in contrast to a decrease of 0.6% in the second quarter. This has caused some to reevaluate growth, especially given the current global economic climate.

First, it appears that the unemployment number is going to remain at historically low levels, although the number could vary widely from month to month. Job postings have recently been at record highs, but an issue is the number of current openings, which also remains stubbornly high, especially by historical standards.

With the retirement of baby boomers, we can expect that the labor participation rate (those working plus those looking for work), which has been on the downswing since the recession, will eventually increase.

While this seems to be a positive, a lot of intellectual knowledge will be lost, along with the required skills needed, to replace the retiring boomers. This will likely force businesses to train their own workers, and not leave the task to schools. A tighter labor market could also lead to some wage inflation, as those with the skills will be in very high demand.

Given the growth in jobs and the increase in wages, the total labor market might keep us from entering a recession.

Next, housing appears to have pulled back some, as demand for both existing and newly built homes have slowed. But the pull-back appears to be inconsistent from month to month. There is also a bit of a pull and a push as a result of rising interest rates and a lowering of some borrowing standards.

Nonetheless, many first-time homebuyers have less-than-perfect balance sheets and are struggling with saving enough money to make a down payment on a home. But in many places around the country, the inventory of existing homes for sale is still very limited because demand is still high. Keep an eye on housing statistics this spring as the last few months of 2022 will either be a blip in seemingly ever-increasing home prices or the beginnings of a downward trend.

Lastly, manufacturing will have a significant impact on the GDP number for the next year, accounting for close to 10% of our GDP. The chronic loss of American factory jobs to lower-cost nations – millions of them went away over the past two decades – appears to have reversed itself – for now.

In the past 12 months, factories added about 467,000 jobs and factory production was the highest it has been in about 14 years, according to the Federal Reserve. But as a percent of the total workforce, manufacturing continues to decline, as evidenced by factories employing about 22% of the workforce in 1979 versus about 10% today.

And while some of those jobs were shipped overseas, U.S. factories have also become more efficient, allowing them to do more with fewer people.

With all of that said, it will be up to companies to increase both their top and bottom lines to produce the earnings required to drive the equity markets forward at reasonable valuation levels.

But investors should also remain aware of the macro-trend lines when it comes to employment, housing, and manufacturing.

The opinions voiced in this material are for general information only and are not intended to provide specific advice or recommendations for any individual.

Gross Domestic Product (GDP) is the monetary value of all the finished goods and services produced within a country’s borders in a specific time period, though GDP is usually calculated on an annual basis. It includes all of private and public consumption, government outlays, investments and exports less imports that occur within a defined territory.

All information is believed to be from reliable sources; however LPL Financial makes no representation as to its completeness or accuracy.

This article was prepared by RSW Publishing.

Providing our clients and their loved ones with objective and value-driven financial guidance.

BrokerCheck is a free tool to research the background and experience of financial brokers, advisers and firms.